A chronograph is a timepiece featuring independent display and stop-watch functions on the dial, the latter of which is presented on a separate subdial window. The term comes from the Greek phrases for time: “chronos” and writing: “graph.” Today, the term is interpreted more about the recording of time rather than writing.

Heuer introduced the first dashboard chronograph in 1911, which was used in automobile dashboards and on aircrafts.  1n 1914, Heuer debuted the first wristwatch chronograph. In 1916 the brand, which would later be known as TAG Heuer, came out with the “Micrograph,” the very first stopwatch accurate to 1/100th of a second.

Breitling is a brand also instrumental in the introduction of chronographs. In 1915 Breitling launched the first independent chronograph push-piece. Eight years later, it perfected the system of stop/start functions on its chronographs, developing a resetting mechanism that was extremely useful for the timing of sporting events and calculation of flight times. In 1934, Breitling created the second independent reset push-piece, a decisive breakthrough in watch-making history. 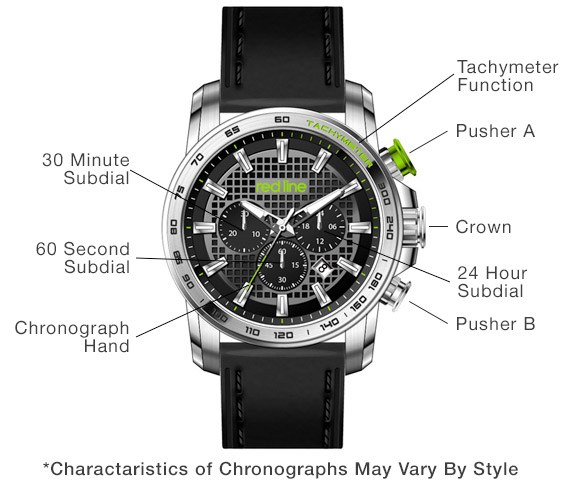 The push-pieces, which are generally located directly adjacent to the crown, serve to activate the split-second, minute and/or hour functions on the dial.

Today chronographs come in all types of movements:  automatic, quartz and mechanical. Each records time in durations ranging from split-seconds to sixty-seconds, 30-minutes to 60-minutes, as well as twelve and twenty-four hour intervals. Unidirectional and bidirectional rotating bezels on chronographs are used for calculations of speed, time and distance. Although a timepiece may have several subdials, it cannot be considered a chronograph without the stopwatch function on the dial. Numerous wristwatches today have day, date and alarm and small-second subdials yet are not classified as chronographs. They are however categorized as multi-function watches.

Prior to the late 1990’s, chronographs were produced almost exclusively for men. In 2000, the brand TechnoMarine introduced chronograph watches expressly for women. The brand created a revolution with their women’s chronographs, which paired premium crafted Swiss-made watches with stainless steel cases on colorful transparent plastic straps in a wide array of fashionable colors.

Many of the TechnoMarine chronographs also featured dazzling diamond bezels with impressive carat weights. The watches were water-resistant to 200 meters and could be worn anywhere. The TechnoMarine diamond chronographs soon became the most sought-after watches across the globe and were seen on the wrists of celebrities, fashionistas and trend-setting women.

Chronographs are still preferred today by many to record times for races and other track, field and sports related activities, along with auto racing, sailing, aircraft piloting and deep-sea diving. Popular watchmakers TAG Heuer, Breitling, Invicta, TechnoMarine, Swiss Legend, Michael Kors, Bulova, Lucien Piccard, Luminox, Rotary, Gucci and TW Steel are among the leading producers of chronographs for both men and women.